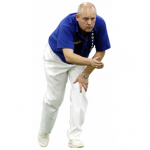 Alex has deservedly built a reputation as currently being the world’s best bowler. His record since he debuted with three gold medals at the 1992 World Outdoor Championships inn Worthing is quite simply amazing.

Since then ‘tattie’ has picked up a further three world outdoor gold medals and his outstanding CV is further enhanced with two Commonwealth Gold medals in 2002 and 2006. His most remembered victory to date is the World Indoor Singles Championship where he has lifted the title a record breaking five times since 1999 and he is now two ahead of nearest rival and good friend Paul Foster. Alex's most recent World title comes in the way of the World Mixed Pairs with Carol Ashby at potters in 2010.

Alex was honoured in the Queens New year honours list in 2007 with an MBE for his services to the sport of bowls.