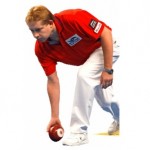 Greg started bowling at the tender age of 11, and was named in the England International team 12 years later.

The down to earth Henselite Sales Manager first hit the scene on the World Bowls Tour in 2004 when he won the international open title at the Ponds Forge Sports Centre in Sheffield.

He went on to successfully defend the title two times to complete a remarkable three in a row. His love affair with the Sheffield venue continued in 2007 when he became the first winner of the World Match Play Championships. Greg also went on to win the 2008 Scottish international Open.

Greg’s most memorable achievement to date is becoming the 2010 World indoor singles Champion for the first time.