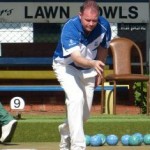 Paul is the youngest member of the Henselite dream team and made history when he became the first player on the WBT Tour to win back to back ranking events and also became the first to record five WBT title triumphs.

In 2005 the troon man joined bowls legends David Bryant, Tony Allcock, Richard Corsie and good friend Alex Marshall as a three times winner of the World Bowls Singles title. In 2002 he partnered fellow scot Hugh Duff to the World Pairs title while his outstanding CV was further enhanced with a commonwealth Games Gold Medal in 2006.

In 2008 Paul became the first Winner of the ‘Premier League’ event which was televised on Sky TV for the first time ever. In 2009 Paul further enhanced his WBT success by lifting the 2009 Scottish International Open. At the 2010 World Championship at Potters Leisure Resort Paul was announced as the WBT player of the year and WBT players’ player of the year 2009 which lead to his number one ranking in the indoor World rankings list for the 2010/2011 season.